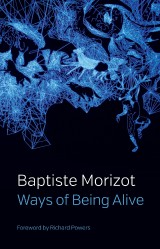 Ways of Being Alive

<p><p>The ecological crisis is a very real crisis for the many species that face extinction, but it is also a crisis of sensibility – that is, a crisis in our relationships with other living beings. We have grown accustomed to treating other living beings as the material backdrop for the drama of human life: the animal world is regarded as part of ‘nature’, juxtaposed to the world of human beings who pursue their aims independently of other species.</p><p>Baptiste Morizot argues that the time has come for us to jettison this nature─human dualism and rethink our relationships with other living beings. Animals are not part of a separate, natural world: they are cohabitants of the Earth, with whom we share a common ancestry, the enigma of being alive and the responsibility of living decent lives together. By accepting our identity as living beings and reconnecting with our own animal nature, we can begin to change our relationships with other animals, seeing them not as inferior lifeforms but as living creatures who have different ways of being alive.</p><p>This powerful plea for a new understanding of our relationships with other animals will be of great interest to anyone concerned about the ecological crisis and the future of different species, including our own.</p></p>

‘Morizot is no armchair or Left-Bank café philosopher. He is a field philosopher, tracking the wolves of Provence, calling to them in their own vernacular, helping shepherds protect their flocks from them. Deeply informed by evolutionary biology, ecology, ethology, and anthropology, this book provides a loadstar for reviving a moribund discipline.’<br /><b>J. Baird Callicott, author of <i>Thinking Like a Planet</i></b>