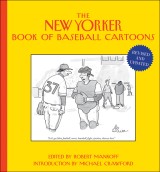 <p><b>Robert Mankoff</b> is the cartoon editor of <i>The New Yorker</i>. He is also a cartoonist, and more than 900 of his cartoons have been published in the magazine in the past thirty years, including the best-selling <i>New Yorker</i> cartoon of all time. He is the author of the book <i>The Naked Cartoonist</i>, published in 2002, about the creative process behind developing magazine-style cartoons. He has also edited dozens of cartoon books and published four of his own.</p> <p><b>Michael Crawford</b> is a staff cartoonist at <i>The New Yorker</i>, which has published his cartoons since 1983. His work has appeared in many publications, including <i>Paris Match</i> and the <i>National Enquirer</i>. A full-time painter, Crawford lives and works in a red barn in Rhinebeck.</p>

<p>With an all-star lineup of cartoonists on deck, <i>The New Yorker Book of Baseball Cartoons</i> captures the national pastime in all its heart-wrenching, uplifting glory.</p> <p>This collection of baseball cartoons, which ranges from armchair obsessives to zany managers and beleaguered players, was culled from the pages of <i>The New Yorker</i> by the magazine's cartoon editor, Robert Mankoff, and features an introduction by the cartoonist Michael Crawford.</p> <p>With contributions by the M.V.P.s of the magazine's more than eight-decade history, from Charles Addams to Jack Ziegler, <i>The New Yorker Book of Baseball Cartoons</i> is a hilarious testament to the passion and the pain of the game.</p>