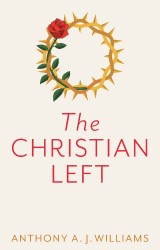 An Introduction to Radical and Socialist Christian Thought
1. Aufl.

<p>Christianity is often assumed to be pro-capitalist and socially conservative &ndash; in short, necessarily aligned with the political Right. But can this be straightforwardly true of a religion founded by a figure who drew his early followers from among the poor and downtrodden and spoke against the accumulation of earthly riches?</p> <p>In this book, Anthony A.J. Williams shows that this assumption is far from correct by giving an introductory overview of a tradition of socialist and radical Christianity that can be traced back to the communal ownership described in the Acts of the Apostles. Focusing on modern Christian Left movements, from Christian Socialism and the social gospel to liberation theology and red-letter Christianity, Williams examines the major challenges faced by the Christian Left today, both from within Christianity itself and from the secular Left. Does the Bible and Christian theology really support collectivism and universal equality? Can Christian radicalism remain viable in an age of identity politics?</p> <p>This book is essential reading for anyone interested in the relationship between religion and politics.</p>

<p>&lsquo;This is a wonderfully comprehensive introduction to the very diverse landscape of Christian political radicalism over the last hundred and fifty years.&nbsp; Its global scope is especially valuable, as is its clear analysis of the tensions between much of the contemporary political Left, with its strong involvement in identity politics, and the traditions of Christian socialism, which is more preoccupied with solidarity.&nbsp; A candid, well-researched and timely study.&rsquo;<br /><b>Dr Rowan Williams, former Archbishop of Canterbury</b></p> <p>&lsquo;A fine, readable, well-resourced and wide-ranging introduction to the spectrum of radical and socialist Christian thought.&rsquo;<br /><b>Revd Canon Dr Jeremy Morris, former Master of Trinity Hall, Cambridge<br /><br /></b>&ldquo;A valuable resource [&hellip;] readable, passionate, and accessible.&rdquo;&nbsp;<b><br /><b><i>Church Times</i></b></b></p>