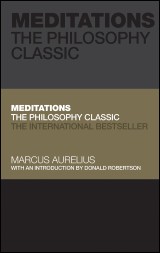 <p><b>A deluxe special edition of the ancient classic written by the Roman Emperor known as &ldquo;The Philosopher&rdquo;</b></p> <p><i>Meditations</i> is a series of personal journals written by Marcus Aurelius<i>, </i>Emperor of Rome from 169 to 180 AD. The last of the &ldquo;Five Good Emperors,&rdquo; he was the most powerful and influential man in the Western world at the time. Marcus was one of the leaders of Stoicism, a philosophy of personal ethics which sought resilience and virtue through personal action and responsibility. Stoicism, viewed as a foundation of modern self-help, has inspired many personal development and psychotherapy approaches through to the present day.</p> <p><i>Meditations </i>is perhaps the most important source of our modern understanding of Stoic philosophy. Its twelve books chronicle different stages of Marcus Aurelius&rsquo; life and ideas. Although he ruled during the <i>Pax Romana, </i>the age of relative peace and stability throughout the empire, his reign was marked by near-constant military conflict and a devastating plague which killed upwards of five million people. Aurelius&rsquo; writings give modern readers an unprecedented look into the &ldquo;spiritual exercises&rdquo; which helped him through his tumultuous life and strengthened his patience, empathy, generosity, self-knowledge and emotional health. The private reflections recorded in the <i>Meditations</i> were never meant to be published, rather they were a source for Marcus&rsquo; own guidance and self-improvement, and jotted down by campfires or in military tents on the Roman front. The lessons, insights and perspectives contained within this remarkable work are just as relevant today as they were two millennia ago. This volume:</p> <ul> <li>Presents the timeless wisdom of Emperor Marcus Aurelius and his Stoic philosophy, with new research on his life and times</li> <li>Contains valuable insights on topics such as resilience, moderation and emotional control</li> <li>Discusses how to live &ldquo;in agreement with nature&rdquo; and abide by strong ethical principles</li> </ul> <p>Part of the bestselling <i>Capstone Classics Series</i> edited by Tom Butler-Bowdon<i>, </i>this attractive, high-quality hardcover volume includes:</p> <ul> <li>An original Introduction by Marcus Aurelius authority and Stoicism expert Donald Robertson, author of <i>How To Think Like A Roman Emperor</i>.</li> <li>A modernised, up to date version of the classic George Long translation. &nbsp;</li> </ul> <p><i>Meditations: The Philosophy Classic </i>is a volume which will occupy a prominent place in any library for years to come.</p>

<p><b>Marcus Aurelius </b>was Emperor of the Roman Empire from 161 CE to 180 CE and one of the leaders of Stoicism, a philosophy of personal ethics which sought resilience and virtue through personal action and responsibility. His writing has inspired many personal development and psychotherapy approaches through to the present day.</p> <p><b>Donald Robertson<b></b> </b>is a writer, trainer, and cognitive behavioural psychotherapist. He specializes in the relationship between ancient philosophy and modern evidence-based psychological therapy. Donald is the author of six books on philosophy and psychotherapy, including <i>How to Think Like a Roman Emperor: The Stoic Philosophy of Marcus Aurelius</i> (2019). <p><b>Tom Butler-Bowdon<b></b> </b>is series editor for the Capstone Classics series. He has written Introductions for Capstone editions of Plato's <i>The Republic,</i> Machiavelli's <i>The Prince,</i> Adam Smith's <i>The Wealth of Nations,</i> Sun Tzu's <i>The Art of War,</i> Lao Tzu's <i>Tao Te Ching,</i> and Napoleon Hill's <i>Think and Grow Rich.</i> Tom is the author of the 50 Classics series and is a graduate of the London School of Economics and the University of Sydney. www.Butler-Bowdon.com

<p><b>The self-reflections of the Roman Emperor known as 'The Philosopher'</b></p> <p><i>Meditations</i> is a series of personal journals written by Roman Emperor Marcus Aurelius. As one of the leaders of Stoicism, the ancient philosophy considered a foundation of modern self-help, Marcus Aurelius' private reflections give us a first-hand look into his life and guiding principles. <p>The 'spiritual exercises' which helped Marcus Aurelius through his turbulent life offer you insights on analyzing yourself and others, developing a clear and rational perspective, and maintaining focus without distraction. Featuring commentary from bestselling author and Stoicism expert Donald Robertson, <i>Meditations: The Philosophy Classic</i> will provide you with a complete philosophy of life that will help reveal your sense of purpose and direction in the modern world.