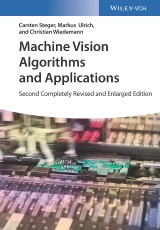 The second edition of this successful machine vision textbook is completely updated, revised and expanded by 35% to reflect the developments of recent years in the fields of image acquisition, machine vision algorithms and applications. The new content includes, but is not limited to, a discussion of new camera and image acquisition interfaces, 3D sensors and technologies, 3D reconstruction, 3D object recognition and state-of-the-art classification algorithms. The authors retain their balanced approach with sufficient coverage of the theory and a strong focus on applications. All examples are based on the latest version of the machine vision software HALCON 13.