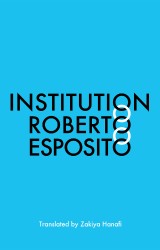 <p>The pandemic has brought into sharp relief the fundamental relationship between institution and human life: at the very moment when the virus was threatening to destroy life, human beings called upon institutions – on governments, on health systems, on new norms of behavior – to combat the virus and preserve life. Drawing on this and other examples, Roberto Esposito argues that institutions and human life are not opposed to one another but rather two sides of a single figure that, together, delineate the vital character of institutions and the instituting power of life. What else is life, after all, if not a continuous institution, a capacity for self-regeneration along new and unexplored paths? No human life is reducible to pure survival, to “bare life.”  There is always a point at which life reaches out beyond primary needs, entering into the realm of desires and choices, passions and projects, and at that point human life becomes instituted: it becomes part of the web of relations that constitute social, political, and cultural life.</p>

“This highly original study by acclaimed political philosopher Roberto Esposito offers a new genealogy of the institution from ancient Rome to the Covid-19 pandemic. For Esposito, human existence is predicated not simply on the bare preservation of our biological life but upon life’s institution across space and time in the form of social, cultural, and political relations. In tracing this <i>institutio vitae</i>, Esposito progressively reveals a new theory of the institution as neither conservative nor repressive, but a creative form of life that liberates us from the twin dangers of institutional sclerosis and anti-institutional anarchy.”<br /><b>Arthur Bradley, Lancaster University</b>

<b>Roberto Esposito</b> is Professor of Theoretical Philosophy at the Scuola Normale Superiore, Italy