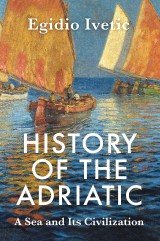 History of the Adriatic

A Sea and Its Civilization
1. Aufl.

<p>The Adriatic is ‘the small Mediterranean’ – a sea within a sea, part of the Mediterranean and at the same time detached from it, a largely enclosed sea with stunning coastlines and a long history of commercial, political and cultural exchange. Silent witness to the flow of civilizations, the Adriatic is the meeting point of East and West where many empires had their frontiers and some overlapped.  With Italy on one side and the Balkans on the other, the Adriatic is the area where the Latin West became intertwined with the Greek and Ottoman East.</p> <p>This book tells the history of the Adriatic from the first cultures of the Neolithic Age through to the present day. All of the great civilizations and cultures that bordered and crossed the Adriatic are discussed: Ancient Greece and Rome, Byzantium and the Holy Roman Empire, Venice and the Ottomans, Catholicism, Orthodox Christianity and Islam. Byzantium was replaced by Venice, queen of the Adriatic, which reached its zenith at the beginning of the sixteenth century and maintained commercial and military hegemony in its Gulf, sharing the sea with the Turks, the Habsburgs, the Pope and the Spanish vice-kingdom of Naples. It was Napoleon who ended Venice’s reign in 1797. In the nineteenth century, the Austrian Empire prevailed, and Central Europe reached the Mediterranean through the Adriatic. United Italy placed its most symbolic frontier in the eastern Adriatic, clashing with Austria-Hungary in the First World War. The twentieth century was marked by the prolonged conflicts and eventually peace between Yugoslavia, Albania and Italy. Today the Adriatic is a region increasingly integrated into the European Union, experiencing a new era of cooperation following the dramatic collapse of Yugoslavia.</p> <p>Across centuries, this book illustrates the rich cultural and artistic heritage of diverse civilizations as they left their mark on the cities, shores and states of the Adriatic.</p>

<b>Egidio Ivetic</b> is Professor of Early Modern History at the University of Padua.