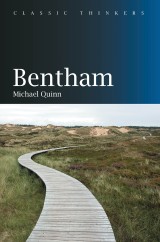 <p>Jeremy Bentham – philosopher, theorist of law and of the art of government – was among the most influential figures of the early nineteenth century, and the approach he pioneered – utilitarianism – remains central to the modern world.</p> <p>In this new introduction to his ideas, Michael Quinn shows how Bentham sought to be an engineer or architect of choices and to illuminate the methods of influencing human conduct to good ends, by focusing on how people react to the various physical, legal, institutional, normative and cultural factors that confront them as decision-makers. Quinn examines how Bentham adopted utility as the critical standard for the development and evaluation of government and public policy, and explains how he sought to apply this principle to a range of areas, from penal law to democratic reform, before concluding with an assessment of his contemporary relevance. He argues that Bentham simultaneously sought both to facilitate the implementation of governmental will and to expose misrule by rendering all exercises of public power transparent to the public on whose behalf it was exercised.</p> <p>This book will be essential reading for any student or scholar of Bentham, as well as those interested in the history of political thought, philosophy, politics, ethics and utilitarianism.</p>

‘Jeremy Bentham was a tireless schemer and policy-designer, a control freak and life-long exposer of corruption and misrule. Michael Quinn’s masterful volume explains how Bentham’s liberating and oppressive ideas all flow from the same principles.’ <br /><b>Peter Niesen, University of Hamburg</b> <br /><br />‘This book is an excellent one-stop source for all things Bentham. Quinn’s command of the philosopher’s vast corpus is extraordinary. Through a series of lucid and engaging chapters he contributes a new reading of Bentham as a pragmatic and supremely relevant theorist of governmental reason.’ <br /><b>Stephen Engelmann, University of Illinois at Chicago</b>

<b>Michael Quinn</b> is an Honorary Research Fellow at Philipps University Marburg and Justus Liebig University Gießen. He was previously Senior Research Associate at the Bentham Project at University College London.

What's Wrong with NATO and How to Fix it
von: Mark Webber, James Sperling, Martin A. Smith